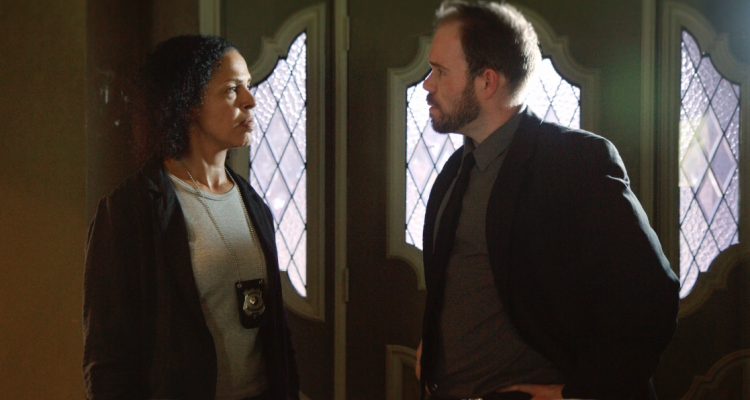 A solid genre piece that maintains the viewers’ attention while also successfully showing how to make a film for less while packing more surprises- all in a limited runtime.

Review: Many indie films are flat out massacred by bloggers and critics on an annual basis given how everyone is trying to imitate each other or can use any digital equipment at their fingertips. Much like the video rental days, it wasn’t uncommon to see a bunch of material that you’d never heard of before and which you’d either encounter on pay cable or by taking a chance and renting it. Long-story short: it was cool and allowed tons of independent films to find an audience without relying on just magazines and word of mouth, let alone renting out local theaters for a month. Unfortunately, after that era, it’s still common to find many unusual films and once again do a guessing game but this time it’s often a truly disappointing routine more than half the time. What was once embraced isn’t necessarily so much anymore and if it’s not on streaming (like Prime, Tubi, Hulu or Netflix), then you’re finding these titles to rent at Redbox and the like. It doesn’t help either that every other IMDb listing or Facebook related post is going to have close friends and crewmembers leaving biased/fake reviews so the frustration is even harder to shake when asking for a reliable second opinion. Much like other bloggers, I do my best to observe and just give an open-minded account, especially when presented with a screener copy. It’s a true honor but I take it entirely seriously as who has time for sarcastic comments as this is a two-way street (tell the filmmaker who cares and indicate what kind of audience might appreciate the film).

Movie-wise: instead of going all gruesome with blood, this film picks a more-laid back, Se7en type style without directly relying on it or having to reference it. The actual crime when it flashes back to packs a punch each times its on-screen in all its creepy nature. The actors all make the film feel more natural and more in-the-moment realistic, which helps with the typical badass detective dialogue pack an extra punch. I’ll give it an extra star simply for wanting to be its own serial killer mystery and use some gifted resources and creative edits as opposed to play it safe and rush something unfinished out. When this becomes available on a streaming platform, I promise you all you won’t turn it off after 10 minutes or look for the Troma/Maverick Home Ent. logo, promise. This is a pleasant indie film surprise!