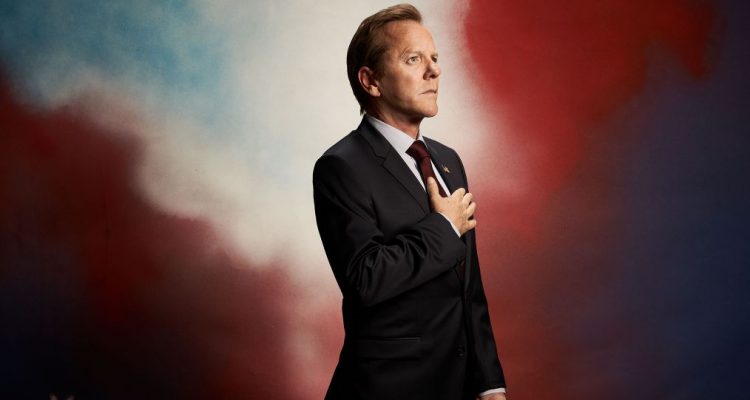 An instantly likable cast, ingenious thrills and beyond relevant talking points fuel this awesome binge-watch of a show!

Plot: This action-mystery-political drama focuses on Secretary of Housing and Urban Development, Tom Kirkman (Kiefer Sutherland, The Lost Boys), as he’s told on the worst day since 9/11 that he’s literally the only guy left to become president when a devastating explosion rips through the Capitol during the State of the Union.

Season 1:
In the aftermath, Tom teams up with Congresswoman Kimble Hookstraten (Virginia Madsen, Candyman), the GOP’s chosen designated survivor, to bring stability back to the country. He also makes Congressman Peter MacLeish (Ashley Zukerman, The Pacific), the lone survivor of the catastrophe, his new vice president. Meanwhile, the FBI desperately try to uncover how the attack was even possible, with Agent Hannah Wells (Maggie Q, Nikita) and Deputy Director Jason Atwood (Malik Yoba, Revolution) suspecting it was an inside job.

This first season is dynamite with a capital “D.” That’s due to the show having a straightforward mood and being either about Tom getting used to being a president (which makes this relatable to the everyday viewer) or the attack investigation. The rest are subplots involving shady dealings for the First Lady, Alex (Natasha McElhone, Ronin) and inevitable political rival disputes. It also helps that Tom’s kids have limited screen-time. I have seen more than enough subplots like this backfire where they either goof up a show’s tone or become irritable and they’re fortunately rendered mute here.

Shows like this are hard to please everyone because they incorporate disaster and spy genre tropes but it’s overall rather welcome since it’s an unsettling premise from the get-go. It helps that the action-mystery aspect is secondary here so that we have time to get attached to the main characters. Organized and unpredictable on the mystery aspect, this first season is mandatory viewing.

Season 2:
Set during the rebuilding of the Capitol building and capturing the terrorists responsible for the catastrophic attack. Meanwhile, the president and his staff’s diplomatic skills are put to the test. This is while Kirkman has to survive the day-to-day situations that take place at home and surviving attacks against his own administration.

Following a far more shocking ending from last season, this season was arguably just as engaging but had five different stories going on at once. The show had suffered from lower ratings and a change in 3 different showrunners(!) leading to its cancellation but more on that later.

So long-story short: this show had lots to measure up to, and as different and changed up as it was, it wasn’t ever on the same level as the first season. Nonetheless, I applaud it for feeling organized still as it introduced new characters who added their own two-cents to the proceedings and new deadly events that the White House had to deal with.

It also gives supporting characters like head Secret Service Agent Ritter (LaMonica Garrett, The Last Ship) and Press Secretary Wright (Kal Penn, House, M.D.) more to do which is good as they previously stole every scene they were in last season. What is missing is the same level of surprise as most of the hat tricks have worn off by now. Nevertheless, it’s not a wimpy show as all the political drama is every man’s worst nightmare and it becomes personal when more rivals show up to pester the cabinet once again.

If you want more spy action and disaster mayhem, don’t tune out as there’s plenty in store. Just keep in mind that the bar isn’t raised as high due to mainly being leftovers from last season. And that’s before it starts feeling like episodes from other shows like Madam Secretary, West Wing, 24 and NCIS.

Season 3:
Tom faces the political reality of campaigning as well as the tribulations of political advertising tactics used by the opposition. He must fight to secure the interest of the public opinion and ultimately, the chances of his administration being elected for a second term.

So after being prematurely cancelled by the morons at ABC, the show makes use of it’s resurrection by making use of the censor free Netflix streaming service. And it honestly pays off since the characters always were edgy and talked dirty on occasion so why not get the chance to actually hear what they were thinking for a change?

The new cast members are commendable, especially Tom’s unethical campaign manager Zimmer (Julie White, Transformers) and new Chief of Staff Harper (Anthony Edwards, ER), and also have their complicated subplots that effect the overall reelection process. It’s mainly cool to see the main secondary focus turn to Aaron Shore (Adan Canto, The Following) as that character has been in so many different job titles thru the show’s run and he now has the opportunity to run as Vice President. He was key voice ob the show so it’s a very rewarding character complement.

Overall, I’ve been seeing lots of people talk smack about this season and it makes zero sense. Everything from one character briefly being shown as gay to more political discussion. People even went so far as to act like the language and sex was too much while acting like this show was biased. First of all, you guys have clearly not seen the last two seasons as there was plenty of blunt dialogue and sexual content. Secondly, talking about various subject matters isn’t biased. The fact that Tom is an Independent who doesn’t want to be like any other politician NOR associate with the other parties is more than open-minded. Last of all, they’ve talked about every kind of issues because that’s what politics is all about. They never asked you to agree or disagree with it; only what the plot demands to move it forward, which I consider a reasonable compromise (and you should too).

The show doesn’t end with a cliffhanger this time and while I can throw stones at Netflix for deciding to also cancel it, I will be the bigger man and thank them for allowing the show to wrap up loose ends and giving us a season on par with the first one.