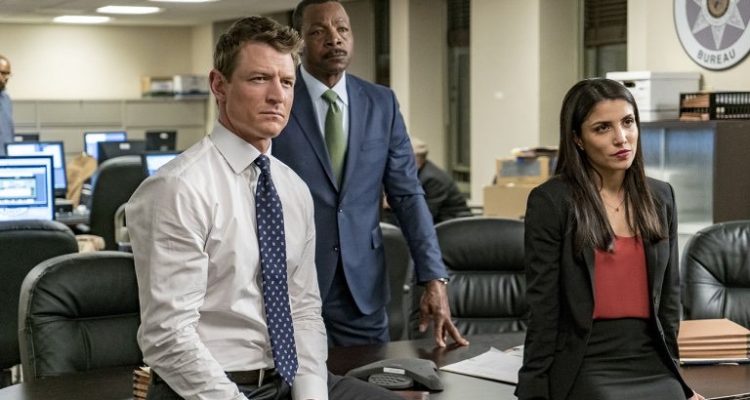 A rather imaginative Law & Order/Chicago franchise spin-off that unfortunately lasted only one season.

Plot: Dick Wolf’s Chicago universe expands into the city’s State’s Cook County Attorney’s office, where a dedicated team of prosecutors and investigators navigates the challenging world of politics and controversy while fearlessly pursuing justice. The city’s high-stakes cases often capture the attention of the media, forcing Attorney Jefferies (Carl Weathers, Rocky 1-4) to balance public opinion, embedded power struggles and their unwavering passion for the law. With him to tackle the various controversial cases are: ADA Peter Stone (Philip Winchester, Strike Back), who is the son of Ben Stone (Michael Moriarty) from the original Law & Order; Investigator Dawson (Jon Seda, Selena), who was previously seen on Chicago P.D.; and Investigator Nagel (Joelle Carter, Justified).

Review: So here we are with yet another short-lived spin-off and does it deliver? Oh, it absolutely does as it’s a cool add-on to both the Chicago and Law & Order universes while being its own thrilling endeavor. It’s already off to a good start thanks to featuring key crossover episodes with Chicago Fire: Season 5 and Chicago P.D.: Season 4. Characters that appear are L&O’s attorney Paul Robinette (Richard Brooks, The Hidden), Chicago Med’s Dr. Charles (Oliver Platt, The West Wing) and various other detectives and firefighters from the other Chicago shows.

I dug how this show tackled every kind of intense topic and theme to get the blood flowing and the excitement to never end. We start off with 39 people killed from a pyromaniac including one of the detective’s daughters. We had some other police corruption, adultery and petty murder done in ingeniously disgusting ways. We had marines-turned-thieves, an environmental group framed for the hit-and-run death of a land commission CEO and even a construction company owner with no-libel insurance to cover up the death of his son-in-law turned employee.

There were three different types of mentoring going as well: Jefferies talking to Stone (especially in the cases pertaining to his former Vietnam recon days); Stone mentoring ADA Valdez (Monica Bararo, Unreal); and Dawson showing Nagel more of the ropes. It was neat seeing a different kind of state attorney who still has values to live by while allowing portrayer Weathers to really nail the characterization.

Peter Stone was not only a smooth but never arrogant and rather calculating in outwitting the opposing legal side while being well-shown at displaying how he’s making his father Ben proud. Dawson was always an interesting yet troubled character on the original P.D. show but it was neat seeing him grow more here as he had to investigate some not-so-clean police arrests while struggling to stay loyal to his detective friends. The Nagel character was also intriguing as she was often investigating some shady parents while mentioning a few times that she was struggling with parental custody of her daughter as well from a failed marriage. The stakes were rather well-raised regarding all the various conflicts and it’s a shame this didn’t last at least two more seasons. Those who know nothing about either prior franchise will still find this to be some neat legal thrills and crime action escapism. Those who are in the know will wonder why this show and Chicago Fire don’t get syndicated more often as there’s plenty of easy-to-get-into plots and there’s never any dull/slow moments.

USA Network, WE TV and Oxygen are always reshowing P.D. and L&O type reruns but why not show these other shows or at least continue this one? Oh well, either way, you’ll be able to binge through all 9 hours of this no problem and buy it cheap and if willing to do so, it’ll pay off!