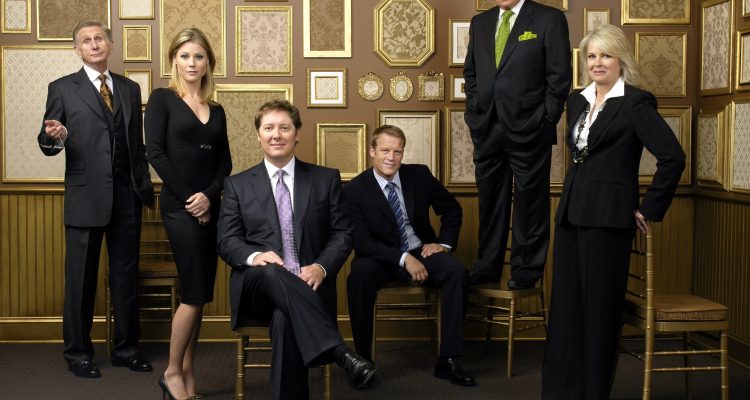 A still rather outrageously witty, well-gelled comedic legal drama show with perfectly executed gags, a memorable cast of characters and timely discussion of many topics.

Review: Season 1 has partner Edwin Poole (comedian Larry Miller) step down after being deemed mentally insane while Alan raises hell on controversial cases and Denny has to prove he’s still competent. Season 2 has Alan both dealing with a sleepwalking disorder and helping Shirley deal with an embarrassing case that involves her. Season 3 continues some of the office staff’s subplots, introduces other whacky characters and has more personal clients for both Alan and Denny. Season 4 introduces new enemy lawyer-turned-senior partner Carl Sack (John Larroquette, JFK) to enforce stricter workplace rules while Denny revolts and Alan takes on more difficult cases including defending Denny. Season 5 has the firm counter its business partner’s change-of-ownership decisions while Denny tries to get his penis to properly work again, get legally married to his dear pal Alan in a non-gay way and get legal custody of a Alzheimer’s-slowing drug that hasn’t been federally approved yet.

The court cases succeed at being food-for-thought, not being overlong, often containing some comedic outbursts, well-written speeches and dealing with military, school, religious and social related issues. The show is delightfully nutty and, despite being a spin-off of David E. Kelley’s other Boston-set shows (Ally McBeal, Boston Public, The Practice), it stands well on its own terms with no needed prior knowledge. The other recurring actors and guest stars are often accomplished and rising character actors or incredibly amusing comedians. Much like any workplace set drama-comedy, it uses a mix of voyeuristic type camera work, some over-the-top pranks and often backs up its implausibility with some other often-hinted at backstory. Complimenting all the wicked fun and occasionally dark humor is composer Danny Lux’s wonderfully done music transitions cues that use various rock, electronic and blues type tones.

On occasion, the show gets philosophical (if not exactly poetic) as each episode often ends with both characters Alan and Denny sitting on one of their private balconies talking about their long-lasting friendship, different beliefs and court victories- all while sharing drinks and cigars. On other occasions, each season will sneak in a few other Easter eggs as well as dare to break the fourth wall, especially in the final season where the duo flat-out speaks to the camera, noting that the show itself is being cancelled(!). You end up looking forward to each court room scene as you know it’s going to be an amusing version of an otherwise heated topic and aren’t sure what hysterical matter will transpire that go-around. Other than wishing some of the office staffers and supporting lawyers could had lasted a few more seasons, this show had no real missed opportunities or any problematic areas. It was great seeing creator Kelley and his crew not only try different kind of nuttiness but deliver it endlessly throughout each episode to where you still wanted more without feeling undernourished. And when you can be out of breath from the belly-aching guffaws and still want more uproarious content, that’s just a pitch-perfect good show!