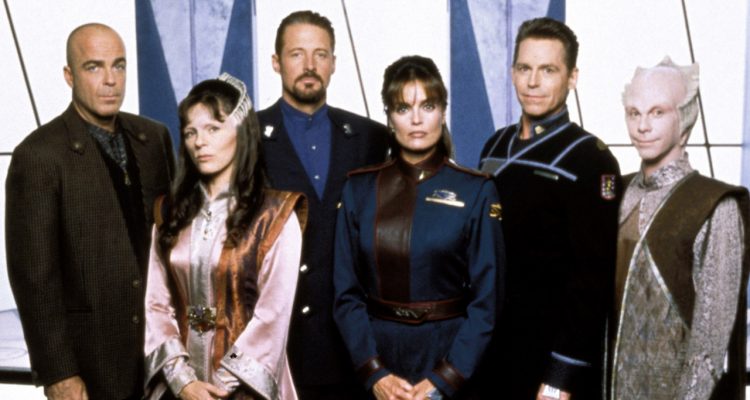 The series, even in its poorly dated and less intriguing moments never loses focus due to its epic story outline, epic space battles and strong parallels between fiction and reality, which all ensure that its an exciting and emotional journey. Despite having trouble catching on initially with audiences and with the studio refusing a Blu Ray transfer, it has recently been finding a reasonable audience on Comet TV and thru streaming on Amazon Prime and Vudu. Absolutely worth checking out in today’s TV binging age.

Plot: The series follows the human military staff and alien diplomats stationed on an EarthForce space station, Babylon 5, built in the aftermath of several major inter-species wars as a neutral focal point for galactic diplomacy and trade.

This groundbreaking series, which was essentially created as Hill Street Blues meets Lord of the Rings in space, is set at the dawn of the Third Age (2257 to 2281) and draws upon a number of cultural, historical, political and religious influences to inform and illustrate its characters and storylines.

Cmdr. Sinclair (Michael O’Hare), executive ofc. Ivanova (Claudia Christian, The Hidden) and security chief (Jerry Doyle). Meanwhile, tensions between the Centauri Republic, an empire in decline, and the Narn Regime, a former Centauri dominion which successfully rebelled, are increasing. Seeking for his people to regain their former prominence, Ambassador Londo Mollari (Peter Jurasik, Hill Street Blues)’makes a deal with a mysterious ally to strike back at the Narn and their Ambassador G’Kar (Andreas Katsulas, The Fugitive). On Earth, some humans resent the influence of aliens, and seek to eliminate them from Earth-owned property, including the B5 station.

The first season after a few lesser episodes hits the ground running by often featuring intricate stand-alone episodes while following the recurring subplots of the station Cmdr. and flashing back to his encounters with Mimbari alien race during a previous space battle. The show doesn’t directly seem like a Star Trek, instead utilizing some of the well-known science and tropes of that, and mixing its own backstory and character development. Some of the suspenseful episodes play off pretty well while others seem hopelessly lost, only for some of them to make sense later on. It helps that the show also features some Star Trek guest stars to rouse up interest as well, including Walter Koenig (Chekov) as Bester of the Psi-Corps, a high-ranking member of a fascist para-military body enforcing laws towards telepath aliens. Its truly a delight to see him playing a charming recurring villain for a change as it ends up showing how Koenig has evolved as an actor.

Captain John Sheridan (Bruce Boxleitner, Tron) assumes the military governance of the station after Sinclair is reassigned, without explanation, to the planet Minbar. He and the command staff discover that now-president Morgan Clark arranged the assassination of Earth President Santiago. Conflict develops between the Babylon 5 command staff and the Psi Corps, as well as the Centauri instigating a full-scale attack against the Narns.

By this point, the show has truly gotten used to its low-budget look and feel as well as its layer story and themes. Boxleitner makes for a more stable lead to follow on the various adventures with and all the other characters finally feel truly fleshed out as they either have a grey layer or you get the gist that they will evolve into something greater or worse. Either way, this season feels absolutely comfortable at this point, and makes for even a worthy rival to the endless Star Trek and Star Wars franchises.

Earth’s government continues to become more xenophobic, while on B5, Sheridan and human looking Minbari alien Delenn (Mira Furlan, When Father Was Away on Business), who have become romantically involved, create a “conspiracy of light” to try to reveal the truth behind the alien race of the Shadows’ and their influence. Historically tense relations between Earth and its Mars colony reach a breaking point when Mars declares independence and Earth’s government declares martial law and attacks. Sheridan, outraged, withdraws B5 station from the Earth Alliance, supported by the Minbari.

This season is in-your-face explosive due to it continually raising the bar with its Action and Mystery elements, it featuring a key mindboggling time-travel two-parter with Sinclair, and Sheridan making the discovery that his wife may not be dead after all in the first big cliffhanger for the show.

Various characters either return having been altered by mysterious alien creatures or are heavily injured in the all-out war between B5 and its alliances and against the Earth government, the seemingly unstoppable Shadows and almost half of EarthForce.

The show is an unstoppable array of creativity this season and should be admired for handling all the endless amount of conflicts in such an organized manner, while proving to be one of the most notable SciFi television entries of the late ‘90s and of all-time.

In 2262, Earthforce Capt. Elizabeth Lochley (Tracy Scoggins, Lois & Clark) is appointed to command B5, which is now also the headquarters of the Interstellar Alliance. A conflict arises between Psi-Corps and a group of rogue telepaths that are seeking their own homeworld after learning that the Vorlons created telepaths as weapons against the Shadows. When several telepaths martyr themselves, Lyta (Patricia Tallman, Night of the Living Dead) leads attacks against the Psi-Corps, becoming an enemy of the state.

Meanwhile, Alliance trade and civilian ships are being attacked by an unknown force, and evidence is discovered that the Centauri may be involved. Separate stories show the long-standing members of B5 making plans to leave the station and get on with their lives.

Much like Season 1, this season takes its sweet time building up to some unpredictable conclusions. It can not outdo Season 4’s epic range and scope, and while some of the fanbase feel like the show should’ve concluded beforehand, they forget that from the get-go that this was intended as a five-season run from the get-go. The beginning portion of this season might be a like it or hate it section but the second half is very uplifting and shows a rather welcome dramatic story displaying the end of the Heroes Journey and their life cycle.