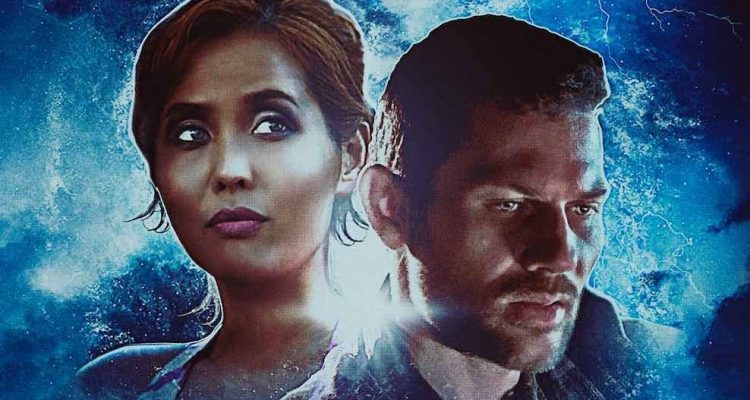 The Fare feels bigger and cooler than other movies of its type might feel, thanks to winning performances.

Plot: A taxi driver finds himself trapped in a time loop. He picks up a pretty woman in a rural area at night. Later she disappears. The loop starts over, when he switches the meter back to vacant.

Review: A cab driver named Harris (Gino Anthony Pesi) is ordered to pick up a fare in the middle of a long stretch of desert. He trudges along in his old, outdated taxicab, never questioning why his fare is literally stranded in a stretch of nowhere, and with an electrical storm on its way, it feels like the beginning of a Twilight Zone episode. When Harris eventually pulls up to the woman, he finds a cute young woman named Penny (Brinna Kelly) waiting for him. When she gets in, you can almost hear the sound of body chemistry intermingling between these two: They flirt, and if things were different for them both, they might make a good couple. But when a lightning strike happens on the road, Penny suddenly vanishes without a trace. Thinking that something extraordinary, but unexplainable happened, Harris resets the meter in his cab, somehow resetting time to the exact moment that he accepted the fare. He’s back on the strange stretch of desert highway again, on his way to pick up Penny. When she gets in the car again, they repeat the routine again. When it happens a third and a fourth time, Harris eventually begins to realize that they’re on a time loop. Turns out that Penny has been aware of it all along for hundreds of rounds, and so when Harris finally gets the drift and catches up to her, they can finally work together to try to understand what is happening to them. Both Harris and Penny have been trapped in a purgatory of repetition for who knows how long, and when Harris begins piecing together his memories and his purpose in life, his consciousness awakens to a greater, more sinister plot where he is at the center.

I’m not usually a fan of the stuck in a purgatory-type horror films such as Dark Country and Enter Nowhere, but The Fare has a fresh spin on the concept, and it’s more of a romantic genre film than a scare flick. It certainly takes its cues from The Twilight Zone, and the writing (by co-star Kelly) and directing by D.C. Hamilton is just sharp enough to feel genuine and endearing. The revelation that comes for the characters later on in the film is somewhat inspired, and for a movie set almost entirely in a car, The Fare feels bigger and cooler than other movies of its type might feel, thanks to winning performances.

The recently released Blu-ray of The Fare comes with lots of bonus material, including several audio commentaries, an alternate opening, extended scenes, and a making of feature, as well as trailers and other content.