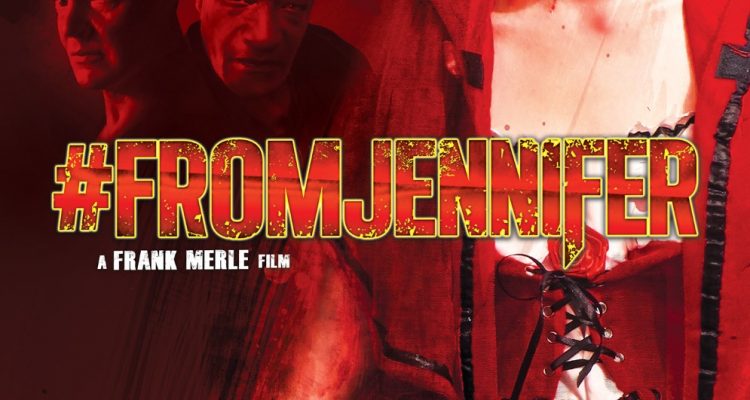 Jennifer Peterson (Danielle Taddei) is having a very rough week. She’s been fired from a movie shoot, her manager just dropped her, and her boyfriend dumped her, right after releasing a sex tape of them together.
But Jennifer has decided to turn things around: she hatches a plot she calls “Revenge Porn Revenge,” in which she plans to settle the score by filming a devastatingly elaborate video and posting it online, making herself famous in the process. But like everything else in her life lately, her revenge plot doesn’t go according to plan, and a shocking trail of carnage is left in her wake.

You’ve got to be an old school horror-thriller fan to want to even do this film, I imagine?. Tell me about some of your favorites?

I grew up with Freddy, Jason and Michael. It’s fascinating to me to track the progression of each of those series, because they all start out terrifying, they hold up for a few sequels, but then they all eventually slip into camp, becoming a parody of themselves. I think it’s because the more familiar you are with a monster, the less scary it is.

Is it true that ‘they’re not as good as they use to be’?

That’s just nostalgia talking. People have fond memories, and that’s fair, but there’s some terrific work happening now. I think it gets harder to scare people as they get older, because they loose their imagination, and imagination is the fuel of fear.

What kind of work did your lead actor have to do to get into the role?

Danielle had a huge task playing Jennifer, because of the character’s gradual slide into madness. And like most movies, we didn’t shoot in order, so playing crazy one day and sane the next was quite a challenge. I think it helped that her hair style as Jennifer was very different from the way Danielle normally wears it, so getting her hair done helped her settle into the character.

Anything she struggled with?

If so, she didn’t show it. She made everything seem effortless, although I know she must have done a huge amount of prep, considering how big her role was. She practically has every other line of dialogue in the film, plus several long monologues, at various levels of sanity.

How did you get Tony Todd and Derek Mears involved?

They both responded really well to the material. I’ve found that actors are always looking for good scripts, and for new, different roles they can tackle. They liked that this film served as a satire of Hollywood and the search for stardom, things that actors can really relate to. They also both appreciated the opportunity to play against type, as neither of them play the traditional sort of “bad guy” they’re known for.

What kind of direction did you give them?

I let them craft the kind of character they wanted to, based on their interpretation of the script. Tony gave me a variety of takes, from super serious to whimsical, which gave me a lot of freedom while editing to craft the tone of the performance. Derek often had to do two things at once, perform as Butch and be his own camera-operator, because of the found-footage nature of the film. He did a great job of handling both tasks at once.

Any hiccups along the way?

There were some technical problems here and there… a camera that wouldn’t turn on, an industrial fridge that wouldn’t turn off, and a cell phone we dropped in a swimming pool. But I’m every film shoot has its share of these annoyances. Overall, I’d say it went smoothly.

What about physical injuries? Ever had anything go wrong on a set?

Safety first on my sets! When we have stunts, I take them very seriously. The key is taking all the time necessary to get it right. Accidents happen when people are rushed, and unfortunately, rushed is the standard speed on most film shoots, especially if they’re low budget. But slowing down when appropriate is important to make sure no one gets hurt.

What do you think of all these people that complain about movies being too violent these days?

I would remind them of all the intense violence in Shakespeare, and that was over 400 years ago. I really don’t think society or movies are getting more violent, there’s just more people and more movies. Film is supposed to be a reflection of life, to help us process all its complexities. So along long as there’s violence in the world (which sadly there always will be) there will be violence in film.

Have you ever had to dial back on action or sex in a film because a financier, distributor or investor has asked you to?

I’ve never heard of a distributor asking for less action! But as far as sex and violence goes, I don’t tend to dwell on that stuff in the first place, so I haven’t run into that issue. Less is more, in my opinion.

What was your favorite moment in the film to shoot?

The swimming pool scene was very exciting! It was an extremely hot day when we filmed that, so the actor who had to get dunked couldn’t wait till his big moment when he could cool off. The rest of us were jealous that he got to go in the pool and we didn’t.

Do you feel you’re a better director when shooting dialogue scenes or moving sequences?

They’re just totally different beasts. Dialogue scenes are all about working with the actors, and that’s fun for me. Shooting action is more technical, it’s all about checking off a bunch of little shots off a list that all hopefully add up to something cool. I think I put more pressure on myself during dialogue scenes, because that’s the stuff that will make or break the film.