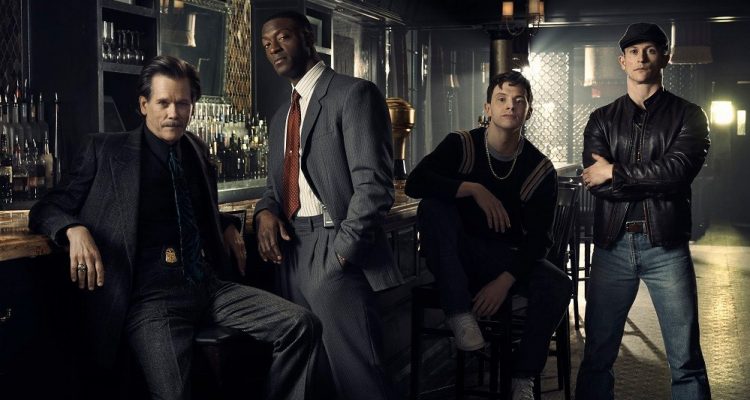 Review: Prior to the opening credits, there is no doubt even when knowing the crew talent involved (this being another gem from St. Elsewhere, Homicide: Life on the Street and Oz producer Tom Fontana) that one is going to find this a gripping yet easy-to-get-into bingewatch! We already have Bacon’s Rohr character abusing substances while being fool of himself after a funeral and Hodge’s Ward being pushed aside by bigoted policemen at a coffee cafe! This show might be a who’s who of previous Showtime and Kevin Bacon productions seeming how it’s a huge all-star cast but it’s at least a well-used one instead of feeling like a desperate attempt to get funded based on starpower names. The cast includes: James Remar (Dexter), Michael O’Keefe (Homeland), Rory Culkin (Waco), Jonathan Tucker (Sleepers), Robert Wahlberg (The Equalizer), Seth Gilliam (Starship Troopers), Kevin Dunn (Dave), Sarah Shahi (Person of Interest), Kevin Chapman (Brotherhood) and Law & Order favorites Kathryn Erbe and Jill Hennessy. The show has much of the same gripping aspects and themes of some of those shows the cast are known for while also containing some of the same state-related commentary you’d see on something like The Wire, Bosch or The Shield. It definitely feels like more of a must-see Boston-set piece especially when compared to overrated material like The Departed or The Town.

If anything, I’d easily place this alongside Gone Baby Gone, Patriot’s Day, Black Mass and The Friends of Eddie Coyle. Hell, even if you want something a little lightweight like the outrageous The Boondock Saints, you’ll eat this giant hamburger of a show up in one big day! The legal battles, crime shenanigans, historical backdrop and mind-games all involve without feeling like the show is doing too little or too much with everything it’s got on display. Half the crime shows that are on these days can get annoying when you feel like they’re taking their sweet time to get going and this fortunately wasn’t an issue here. This show clearly had an idea of what’s already been done AND what works when it comes to giving anyone an excuse to watch anything: do it all well and throw in well-earned surprises.

With the legal battles, money extorting and overall expose of Boston’s cesspit, we are treated to more than than just a multi-character perspective show and instead have a cool 10-episode expose of various people trying to adapt to the new era that was the 1990s. Since they clearly have to improve themselves from the troubles of the ’80s and they’re signaling many of the mistakes that the present-day populace is still making, this becomes a very neat layering of . Not here to reminisce or rant, the show does the usual subtexting and instant establishing of the further issues that characters want and hope to accomplish in their respective professions.

Rohr and Ward are two different men but they are similar in that they want to be accepted for who they are. The supporting characters also allow this show to stand out more in that they’re additional voices that are more than just mere compliments and more of a vital anchor to the whole troubled portrayal of this city. No one ever feels like they’re just watching another over-exaggerated movie and every scene matters without feeling like stylish excuses for redundancy. These various crooked areas of Boston might be a giant toilet but at least you get a sense that by the end of it, most of it will be unclogged. Plus, it’s fascinating to see everything on-screen due to the humanity that is visible- which is another thing missing from some of today’s recent titles. By showing and doing, what better things could you ask for a show to do right? If you’ve already are up to speed on other easy attention-getters like Jack Ryan and need more Breaking Bad type mayhem to dig into, this show is your next destination!