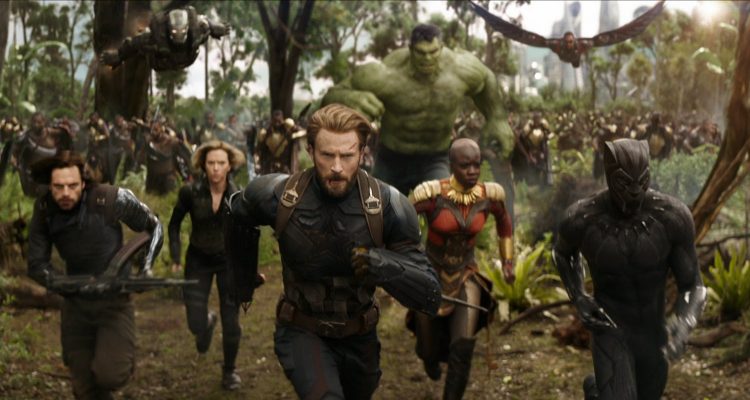 Avengers: Infinity War – A Look Ahead

One of the tentpole movies of the year is being prepared to drop on us this week. The ending of “Phase 3” of the Marvel Cinematic Universe, Infinity War is the team-ups to end all team-ups as pretty much every character introduced thus far in the MCU will be involved in trying to stop Thanos from killing half the universe. Half mind you…half. Apparently, Thanos is very much on the fence about the whole half/empty glass philosophies. To prepare you for this epic event, I thought I would give some predictions and hopes about where this movie ends up. Keep in mind, I’ve been trying to avoid spoilers for this movie, so if any of these have been confirmed, I am ignorant of this news.

Prediction: The Soul Gem is in Wakanda

I think this one is kind of a given. In the trailer, you see a bunch of Wakandians gathering, looking ready for battle and later, you see the entire MCU running towards the camera with lush jungle setting whizzing by. To date, we have had five of the six infinity gems revealed – the only one missing is the Soul Gem. Perhaps it’s in that sandy pit thing that we saw in Black Panther that allowed Black Panther to speak to his father? Anyhow, I think this is what we’re going to see for the third act climax with the initial parts of the movie seeing Thanos travel around, gathering the other gems and periodically engaging the heroes while he does.

Hope: Thanos does NOT gather all of the Infinity Gems

Generally, when these movies are plotted out, this is the blueprint: Bad guy tries to obtain something, he/she does, becomes a threat that possible (or probably) destroys the universe, good guys, who have been fighting the entire picture or having their differences, assemble and stop the bad guy before he destroys the universe. However, in this case, I hope that doesn’t happen. In the comics, the Infinity Gauntlet is pretty much the ultimate weapon; all the wearer has to do is wish something, and it manifests. If Thanos gathers the completed Infinity Gauntlet, how plausibly would the heroes stop him? They couldn’t – the machinations in the comics were crazy to beat Thanos, and most of those characters haven’t been introduced yet (*cough*Adam Warlock*cough*). So, unless the writers wanted to open up a can of internet ridicule, the best thing would be to make sure Thanos doesn’t get fully blinged-out.

Prediction: No one major dies

This one is a little more of a daring guess, considering how much chatter has been out there for what feels like eons that this movie will have major repercussions on the MCU, including major deaths. However, I contend that Marvel sort of let the cat out of the bag by announcing the 4th Avengers movie. While it’s possible that Marvel could give me the middle finger on this one, I don’t think they would expend all of their ammo before the upcoming Avengers movie which is probably going to be advertised to Hell and back. Losing major stars at this juncture of time could possibly temper some of the enthusiasm for the next Avengers movie (probably not, but you never know). I think we’ll see major departures after part 4, but not for this one.

So, one of my major problems with the Avenger movies lately has been the amount of infighting between the heroes. There was some mild bickering, and mixed agendas in Age of Ultron followed by a full-blown confrontation in Civil War. You know, because Marvel can’t create credible threats for the Avengers, may as well let them fight each other. Well, that’s not what I pay my money for. I want to see the Avengers team up and face scary, lethal threats – not overreact and blow up because General Ross shows up and tells them they’ve been bad. I want to see Thanos show up, start tearing up the place. I then want the Avengers to band together with the Guardians, Dr. Strange and possibly the Stay-Puft Marshmallow Man, and kick some butt. If I have to hear another difference of opinion between Iron Man and Captain America, I will seriously projectile vomit.

So, during the trailers, there’s been shots of Thanos ripping out the Mind Gem from Vision’s head. So, does this mean that Vision will die? Nope, because Marvel has really taken pains to establish the burgeoning romance between the Scarlet Witch and Vision. I think if they kill him, then there was no point in devoting that much time, considering that both characters are mostly supporting players. No, what I think you’ll see is that action instead turns Vision…human. That will allow him and Scarlet Witch to take the next step in their relationship and possibly even bow out from the series (remember, I said no deaths, but I didn’t say no characters would possibly leave). You see Vision in that big show of the hero characters charging at the camera? I don’t remember seeing him – and that’s because he’s either dead (nope) or human (yup).

Hope: The Black Order gets more than a cameo

I don’t know a lot about this group, but from what I understand is they are a bunch of aliens that serve Thanos. I know that I saw a shot of one in the trailer torturing Dr. Strange. However, I know this is Thanos’ movie, and he will be the most prominent of the villains. That’s fine, and that’s what I want – but I also think the Black Order is a cool idea and they will serve as a great buffer when Thanos is too busy getting gems to fight the good guys. It would be easy for this secondary villain characters to get lost in the shuffle, but if they do, it will seem like a waste of time. Hopefully, they get some time to establish themselves as their own characters and be a viable threat when Thanos is taking five from the fighting.

Prediction: There will be no Adam Warlock or Silver Surfer

I should actually qualify Warlock – I don’t think he’ll be in the main movie, but will probably be in one of the bazillion end credits scenes these movies seem to have. But no, I don’t think Warlock will be seen during the main film. I also don’t think we’ll see Surfer in this one, due to the fact that this movie was in production when Disney and Fox cut their deals. It’s a shame because Surfer has a major role in the Infinity Gauntlet saga, while Warlock is the main good guy, it’s definitely his story, despite the other major characters in the story. The fact that neither will be there will be a shame, but what to do.

Hope: The movie has a proper ending

There’s been a lot made about how there was really supposed to be part one and two instead of Avengers: Infinity War and Avengers: The Movie We Refuse to Tell You the Title of. This leads me to wonder if we will get an actual proper ending to this movie where Thanos is defeated, the infinity gems are scattered (or who knows, destroyed) and peace reigns until the next threat. However, considering how sketchy Marvel has been with these movies and using some titles just to set up other movies, it’s entirely possible that we will get an ending where Thanos may be temporarily stopped, but then at the end come up with a new plan to get the gauntlet and then smile at the camera. To me, that would suck. I hope we get some resolution in this film and not have to wait for next year to get this whole infinity gem story over with.

In retrospect, it’s been a mind-numbing journey. Ten years and eighteen movies have led to this flick coming to fruition. Who would have thought in the nineties or the early aughts that we would be sitting here right now, talking about a picture of this magnitude? Here’s hoping that it lives up to the hype and we get the picture that we’re hoping to get. In whatever case, I think it will be a huge picture as far as money goes, but if it fails, then I think some people, who are already experiencing comic movie fatigue, may begin to tune out the Marvel movies. In a matter of a few days, the Avengers will re-assemble, Thanos will begin his dastardly deeds and hopefully, we’ll get a damn good movie.